This is a very clean and fresh tasting soup but so nourishing with its chicken bone broth base.

ingredients for the broth base.

two small chickens or one large. 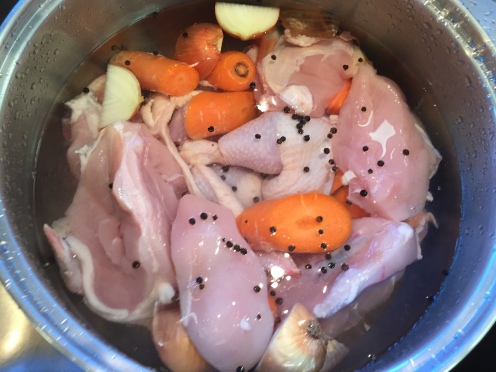 Cut the chickens into pieces. I like to cut the breasts off for easy early extraction and then roughly cut the rest into a few pieces with strong chicken scissors. Chop the vegetables, no need to peel. Put everything into a large saucepan and cover with water. Bring to a gentle simmer, you want a very gentle simmer for a clear broth. 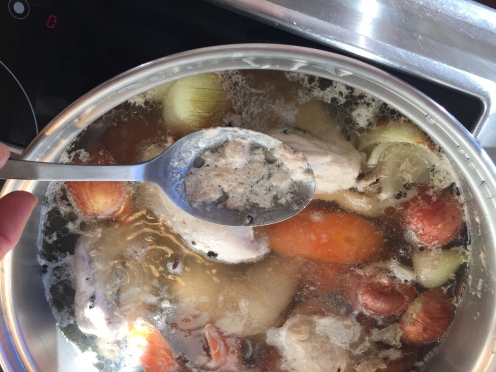 Carefully remove any scum that will rise to ther surface during the first 1/2 hour of the simmer. I like to remove the breasts after about 20 minutes of cooking, they can then be used for salads or other dishes, removing them early keeps them flavourful and tender.  Gently simmer everything else for a further 3 hours.Towards the end of the cooking I like to throw in some parsley stalks if I have some. 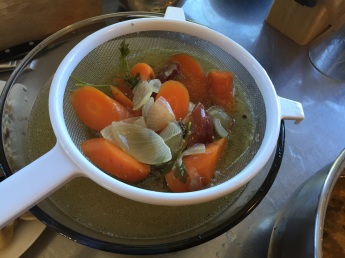 You can see how clear the broth is with the gentle cooking. Prepare a sieve over a large bowl and firstly pull out the pieces of chicken and let them drain a while then transfer them to a plate to cool. Then sieve all the vegetables and discard. 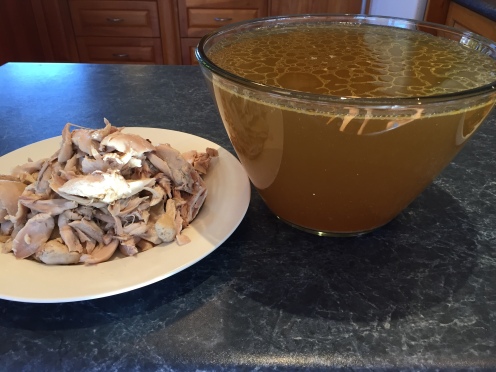 When the chicken has cooled seperate the chicken meat from the bones and skin. Here I have a large bowl of broth and a bowl of chicken pieces to use in my soup. Put the broth in the refrigerator over night so that fat can harden on the top for easy removal. After removing the fat I like to freeze some of the broth and chicken pieces for another time.

for this simple soup you need.

200gms of the chicken meat.

1.5 litres of the chicken broth.

1 teaspoon of salt and pepper to taste.

Clean and finely slice the leeks. Wash and chop the coriander use all the stalks as well as the leaves, reserve some of the leaves for garnish. Add everything to a large saucepan. Start with the juice of half a lemon or 20ml of juice, then add more if you think it needs it, you are looking for a fresh lemony taste. Adjust the seasoning to taste.

This is a nourishing low carb soup that is easy on the digestion. If you would like to make it a bit more Keto or just because you like it then add a glug of cream or olive oil. Carbs per cup about 3gms.